Personal Growth and Personal Development has been studied by theologians, philosophers and psychologists for 6,000 years. Since the dawn of thought, the most historically significant figures either consciously or unconsciously implemented the concepts taught by today’s Personal Development experts. Personal development exercises the mind and sharpens awareness, it is based in the concept that what a person thinks about will come about.

Personal Development aka Professional Development and Personal Growth has become increasingly popular over the last 20 years. The 2006 release of the movie “The Secret” starring Bob Proctor and Jack Canfield, written by Rhonda Byrnes has raised awareness on the topic significantly in recent years. This self help / personal development instant classic was originally written as a book however the movie version brought the term “Law of Attraction” into the main stream in The United States of America as well as around the Globe. The movie has been viewed by over 250,000,000 people in several languages.

1910 classic “The Science of Getting Rich” a book based on the idea that if you think and live your life in a “certain way” by simply making subtle changes in habits and in thought process you will eventually mold yourself into a person worthy of great wealth. The book explains that living in a creative way as opposed to a competitive way you will ultimately be rewarded. 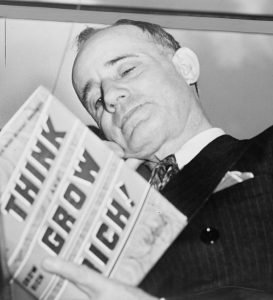 In 1937 Napoleon Hill published the original version of “Think and Grow Rich”. Think and Grow Rich is based on Napoleon Hill’s 25 year study of the 500 wealthiest people in America at the time. Hill was given a journalism assignment to interview highly successful people and write a series of articles on what made those people wealthy and successful. Hill, by a stroke of simultaneous “luck” and genius decided he would call on the world’s most powerful and wealthy man of his time, Andrew Carnegie. Carnegie was the world’s first recorded billionaire. He gained his wealth by founding the Carnegie Steal Corporation.

In 1908 the journey began for Hill when he was shocked to be invited to Carnegie’s office to discuss the article. Hill assumed he and Carnegie would be meeting for only a couple hours. What occurred that day changed history and seeded success for literally millions of readers. Hill spent hours talking to Carnegie and eventually Carnegie invited Hill to his home to discuss the project. It is reported that Hill and Carnegie spent the entire weekend, nearly 3 days, without sleep discussing the potential of a book dedicated to the Philosophy of Success.

Carnegie challenged Hill and asked him if he would be willing to spend the next several years of his life interviewing the world’s most successful people to create a formula that anyone can follow in order to achieve success and amass great wealth. Carnegie promised very little compensation however, he promised Hill that if he unraveled the formula and began living by the formula he would by default achieve great riches.

Hill’s first inclination was to succumb to self-doubt and deny the request, as incredibly appealing it may have sounded. However as he began to describe to Carnegie why he didn’t feel he was the right person for the job; he was uneducated, he was not wealthy himself, Carnegie broke in with one of the most profound speeches one person has ever given to another. The “Two Envelope” speech is explained here by Napoleon Hill himself.

Take a few minutes to watch this video:

Interestingly, the future of personal and professional growth could have been altered that day. At the time Napoleon Hill was unaware of this but, at the end of the conversation between Hill and Carnegie described in the video above Carnegie asked Hill to make a decision on the spot. He asked him if he would set aside his self doubt and begin the project. Without Hill’s knowledge as Carnegie finished the question he quietly clicked the pin on his stopwatch and gave Hill exactly 60 seconds to make his decision. Had he delayed or floundered on the decision Carnegie would have rescinded the offer and given the project to somebody else. As they say: “the rest is history”. Free Think and Grow Rich E-book

Earl Nightingale was a popular radio show personality for many years prior to becoming a motivational speaker and personal development expert. Mr. Nightingale co-founded The Nightingale-Conant Corporation with Lloyd Conant in 1960. The company produced motivational material recorded on vinyl records. Earl Nightingale studied Napoleon Hill’s book “Think and Grow Rich” and ultimately won a Literary Prize from Hill’s Foundation in 1989. The Napoleon Hill Gold Medal for Literary Excellence was awarded to Nightingale for his book “Earl Nightingale’s Greatest Discovery”.

Nightingale’s radio show was syndicated in more than 20 countries. Nightingale recorded over 5,000 radio shows and was inducted into the National Broadcaster’s Hall of Fame in 1985. Nightingale’s vinyl personal development recordings had a particular listener of note, his name is Bob Proctor.

Bob Proctor grew up in a small suburb outside Toronto and spent the early part of his life in the Canadian Navy and eventually he served as a fireman. In 1961 he was first exposed to Napoleon Hill’s book “Think and Grow Rich” by a man named Ray Stanford that lived near the fire hall where Proctor worked. Ray Stanford is described by Proctor as “an incredible man that spent most of his time trying to wake people up!” Ray Stanford saw more in Bob Proctor than Bob saw in himself.  One day Ray Stanford pulled a wad of cash out of his pocket and said to Bob Proctor “This stuff can’t talk but it can hear and if you call it, it will come.” Stanford explained to Proctor that there was more to life than being broke and in debt. Stanford convinced Proctor to not only read Think And Grow Rich but study TAGR and to set a very clear, even illogical goal. Proctor, motivated by the thought of finally being out of debt, set a goal in 1961 to have $25,000 by January 1, 1970 and began reading the book, a habit he hasn’t quit even today.

Armed with new-found confidence and a now somewhat faded copy of Think and Grow Rich, Proctor opened a business cleaning offices. Up until that day Proctor had never earned more than $4,000 in any year. Within a couple years Proctor’s income went to $175,000 and by 1966 his income went over $1,000,000.

Bob often wondered how it all had happened, early in his life he was always told that you needed to be highly intelligent or educated in order to build wealth. At this stage in his life Bob would drive around in his car listening to Earl Nightingale’s “Strangest Secret” on a battery operated record player over and over again. It occurred to him that he needed to determine what had happened in his life.

After a sales meeting one day he said to one of his salesman “I’d like to meet Earl Nightingale.” The salesman said “No you wouldn’t, if you did actually want it, you’d go do it”. Bob Proctor thought about that comment and it must have had a profound effect on him.

Shortly thereafter Bob Proctor was working for Earl Nightingale in the Nightingale-Conant Corporation. After 8 years with the company Bob Proctor formed his own organization Bob Proctor Life Success Consulting, which today distributes coaching programs in over 100 countries. Bob Proctor is the author of many books one of them being, You Were Born Rich, YWBR is a step by step guide to accumulating wealth and success in all areas of your life. Free You Were Born Rich Ebook

Exclusive video, Bob Proctor telling his fascinating story to a group I was working with in early 2010. If you are a Think and Grow Rich – Napoleon Hill fan you will really enjoy this video, it is only available here, it is hosted by youtube but set as private:

I hope you can see the lineage here, Wallace Wattles, Andrew Carnegie to Napoleon Hill to Earl Nightingale to Bob Proctor. Bob Proctor has mentored me and I am sharing with you. Bob Proctor is considered the world’s foremost expert on the human mind and I am very proud to have formed a partnership with him.

Get some amazing Corporate and Professional Development training for free.